December 21, Solyanka VPA State Gallery opened an exhibition featuring CYLAND works in Moscow. Entitled All about ‘Nu Pogodi!’ and Contemporary Art in a Rush, the exhibition is dedicated to the jubilees of two outstanding animators: the 90th anniversary of Vyacheslav Kotenochkin and the 95th anniversary of Svetozar Rusakov.

At the exhibition, CYLAND MediaArtLab presents Jumping Jacks, an installation by Anna Frants, and Filtration of White Noise, an installation by Elena Gubanova and Ivan Govorkov. Both installations creatively use light as their medium. For example, ancient amphorae in Jumping Jacks depict running or jumping athletes on the Greek vases, except that, instead of the familiar red or black figures, we see on them videos based on Muybridge’s photographs “Human Figures in Motion” taken only about a century ago. This work of the 21st century could be called “post-post-modern” in that it proves that everything old (or very-very old) is new again. 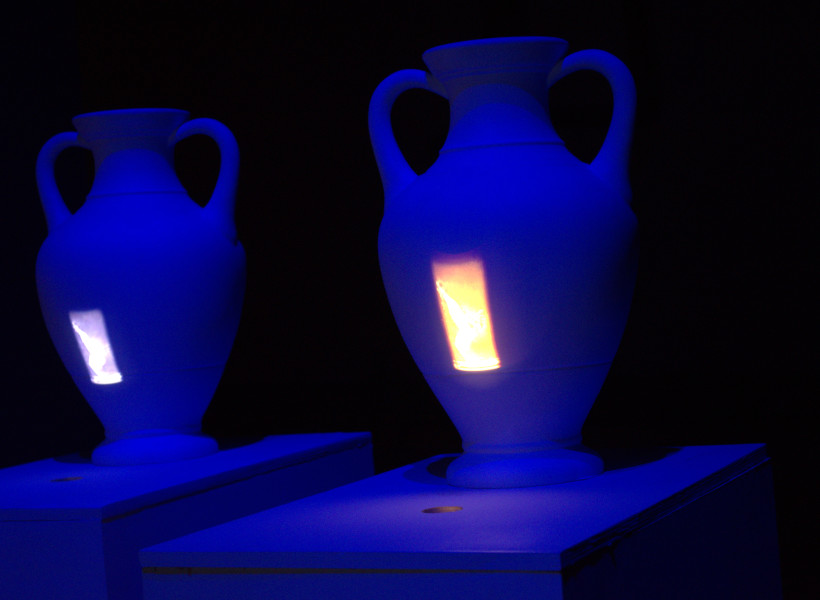 In Filtration of White Noise, the image is interactively connected with the viewer’s movements. By entering the room, a person “startles” the peace and emptiness of the space by filling it with the movement. He brings reality and the reflection of reality “to life” and turns “nothing” into “something”. As the viewer moves, the space fills with fluorescent flying white images-birds – with the troubled movement of black and white that, ultimately, “pulverizes” into the “white noise”. The artists use video not as a finished artistic image, but rather as an artistic material. Most likely, the only important thing here is the light that, forcing its way through darkness, assumes the shape of soaring birds, fills the space with itself and disappears when the viewer leaves. The beholder is gone – light is gone – shadow is gone – the world is gone.

All about ‘Nu Pogodi!’ and Contemporary Art in a Rush